This question was asked by Betty in Birmingham, UK.

The simple answer to this question is that the Sun is hot because it is a star, and stars are balls of burning gas. But that’s not a very interesting answer so let’s find out some more!

The Sun is the largest object in our solar system; you could fit over a million Earths inside it! Astronomers think that it formed about 4.5 billion years ago. It’s mostly made of hydrogen, with a bit of helium and tiny amounts of other elements such as oxygen, carbon, nitrogen, iron and others. The Sun rotates but because it’s a ball of gas instead of solid like a planet, it doesn’t all rotate at the same speed. The gas at the Sun’s equator spins once every 25 Earth days, while at its poles the Sun rotates once every 36 days. 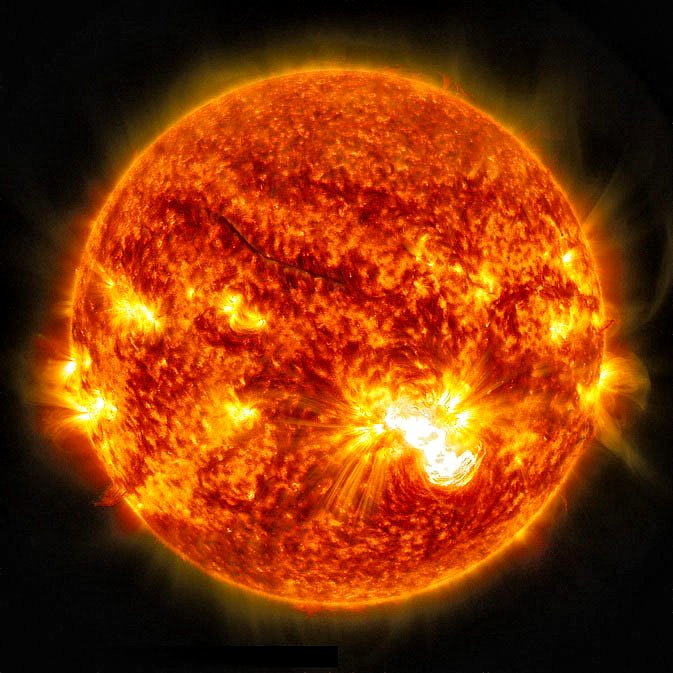 The Sun’s heat is created by nuclear fusion, which happens at its centre. This is where the Sun’s hydrogen atoms are under so much pressure that they change into helium atoms. This process gives off huge amounts of radiation as well as heat. The Sun’s surface temperature is thought to be 5,700 degrees Celsius, which is a lot hotter than the Earth’s average surface temperature of 20 degrees Celsius!

Because of the tremendous heat the Sun gives off it appears white. It only seems yellow to us on Earth because we’re viewing it through our atmosphere. The Sun is also spotty; magnetic activity causes patches on the Sun’s surface that are cooler than the surrounding areas, so they appear darker.

Remember: never look directly at the Sun or you could damage your eyesight.