For millennia humans have dreamed about being able to fly and this shows in our myths and legends; there’s Icarus, Kay Kāvus, Wayland the Smith, Kibaga and many more. Attempts at flight included jumping from towers, giant kites, balloons and even wings that could be strapped onto a person and operated with ropes. But it wasn’t until the 20th century that human understanding and technology reached the point where we could design and build machines that would fly reliably and safely.

Aeroplanes use four forces: thrust, lift, weight and drag. Thrust is the force that moves the aeroplane forwards, and in modern aircraft this is provided by the engines. The lift is provided by the wings, which are rounded along the front edge so that the air divides and flows smoothly over and under them. An aeroplane’s wing is flat on the bottom and curved on the top, which means the air passes over the top of the wing more quickly than it does underneath. This makes the air pressure above the wing less than the pressure below the wing; to put it another way, there’s more air pushing the wing up than there is pushing it down. This lifts the aeroplane up into the air. 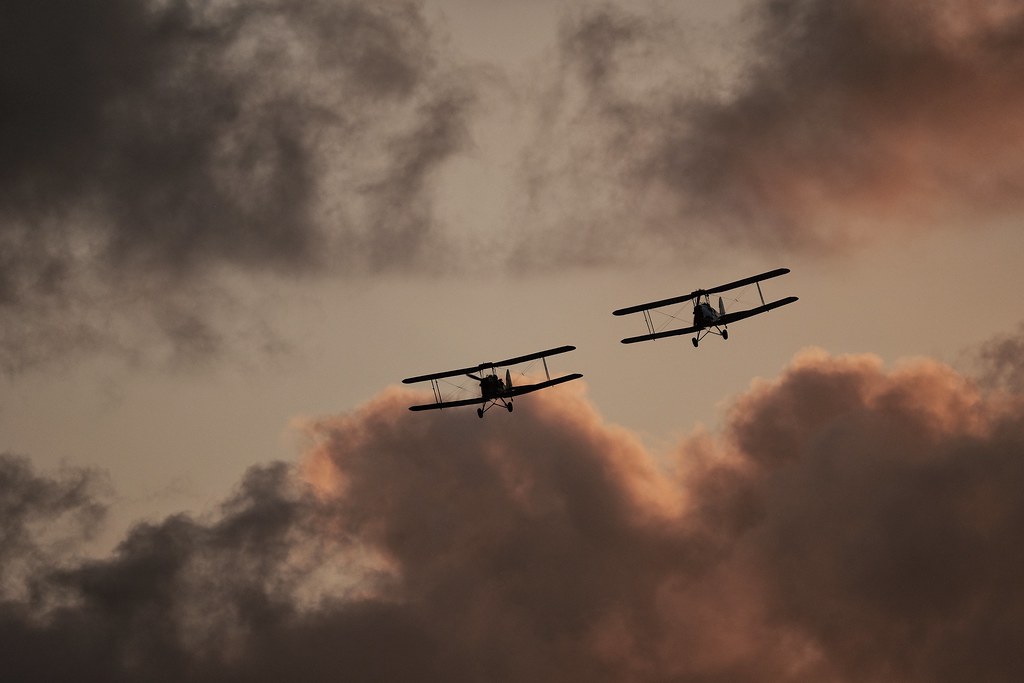 Older aeroplanes had multiple wings so they could provide more lift and make up for the lack of engine power. “Sunset Fly over 2019” by leweeg10 is licensed under CC BY-NC-ND 2.0

The weight of the aeroplane has to be evenly balanced from front to back, so that the pull of gravity and the lift are evenly spread. Aircraft are also designed to be smooth, and narrower at the back than at the front so as to reduce drag. Drag is what you feel when you’re walking into a strong wind, and the force of the air moving around you slows you down. If the four forces of thrust, lift, weight and drag work together then the aeroplane will fly.

This explains how an aeroplane flies, but how does it turn? Well, aeroplanes turn by lifting one wing and lowering the other, which is known as banking and causes the aircraft’s path to curve. The wings have flaps on them to help with this; if these flaps are situated in the middle of the wing they’re called spoilers, and if they’re on the rear edge of the wing they’re called ailerons (as in the image below). 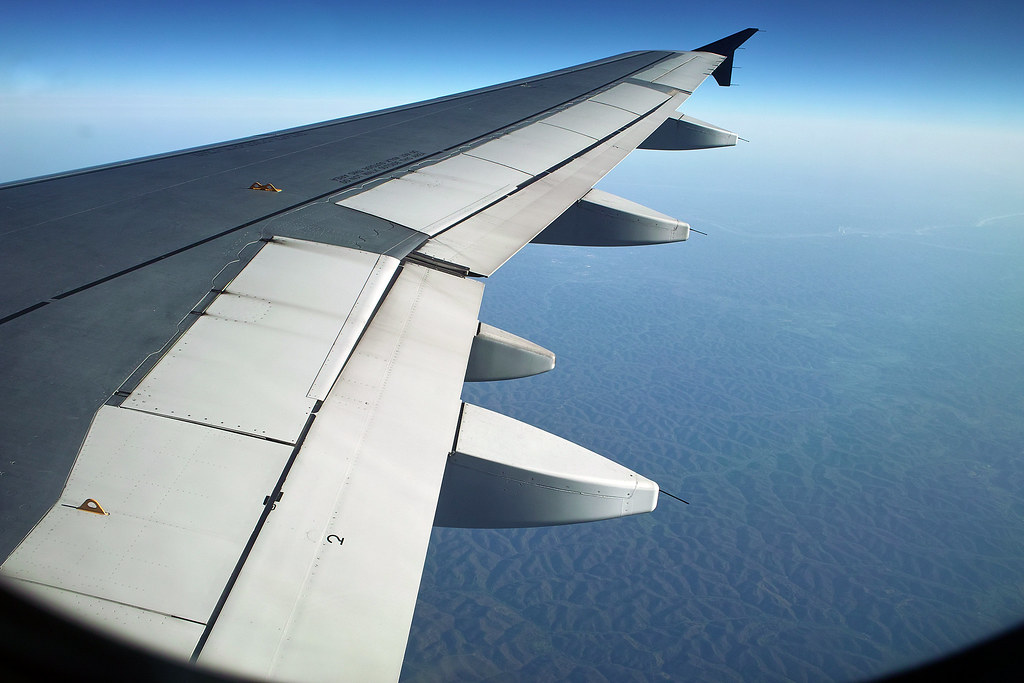 “Obligatory Wing Shot” by dcJohn is licensed under CC BY-NC 2.0

The ailerons or spoilers (I’ll just refer to ailerons from now on but they work in the same way) can be lifted up or moved downwards as a way of changing the shape of the wing, and therefore altering the movement of the air around it. If the aileron is deflected downwards it increases the distance the air moving over the wing has to travel; this decreases the air pressure above the wing and increases the lift below it. If the ailerons on the right wing are raised and those on the left wing lowered, the right wing will dip and the left wing will rise, causing the aeroplane’s forward motion to curve.

Aeroplanes also have rudders but unlike those on boats these have nothing to do with steering or turning; instead they help to stabilise the aircraft. While the aeroplane is banking the forces acting on the body of the aeroplane become greater on one side than the other. The rudder, which is attached to the tail of the aircraft (this is also known as the vertical stabiliser) helps to balance out these forces in the same way that the ailerons do; it just alters the air pressure from one side of the aeroplane to the other instead of from above to below.

Featured image “Airbus A380” by stephen_dedalus is licensed under CC BY-NC 2.0