This question was asked by Hannah from Devon, UK.

Most people know that ocean tides are caused by the Moon, and a lot of people could tell you that this is because of the effects of gravity. But when it comes to exactly how and why this happens, there’s often a bit of confusion. So let’s start with the basics; tides are what we call the movement of large bodies of water like the oceans. High tide is when the water has risen up the land as far as it can go, and low tide is when the water is at its lowest point.

This movement happens because of the way the Earth and Moon interact with each other. The Moon orbits the Earth of course, and it does so because of the Earth’s gravitational field. What you might not have known is that the Earth also reacts to the Moon’s gravity. Imagine yourself spinning in a circle, holding a rope with a heavy weight on the end. The weight (the Moon) is spinning around you but in order to keep your balance you need to lean back slightly. The weight spinning around you is having a small but significant effect on you.

As the Moon orbits the Earth its gravity pulls the water towards it, causing a high tide. Interestingly it also pulls the far side of the Earth towards it slightly, as we found from the rope example above, and this means that there is a high tide there too. At the same time there are low tides on the other “sides” of the planet. 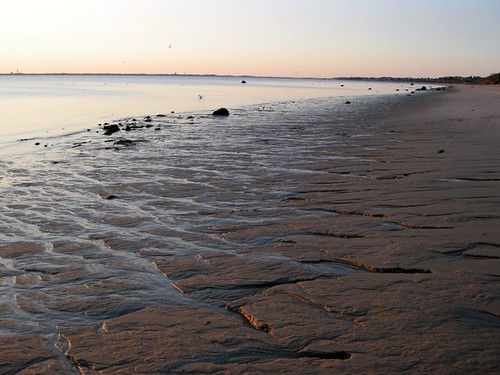 “low tide” by Xavier Dunigan is licensed under CC BY-NC-ND 2.0

The Sun also affects the tides but because it’s so much further away the effect is smaller. However, when the Sun, Moon and Earth are all in alignment (as happens twice a month) the increase in gravitational force on the water causes a high tide that is just a bit higher than usual. This is called a spring tide.