‘Anaesthetic’ (pronounced ann-ass-thet-ik) comes from a Greek word meaning the loss or absence of sensation. There are two kinds: general anaesthetic (where the patient goes to sleep for the duration of a medical procedure) and local anaesthetic (where a particular part of the body is numbed). Local anaesthetic can be injected into the body, or applied onto the skin as a cream or a spray. It is often used by dentists and doctors when performing minor procedures like extracting teeth or removing warts and verrucas. It can also be used to decrease sensation below a certain area of the spine, for example when a woman is undergoing a Caesarean section. It stops the patient feeling any pain in that area of their body, but they can still feel pressure and movement. 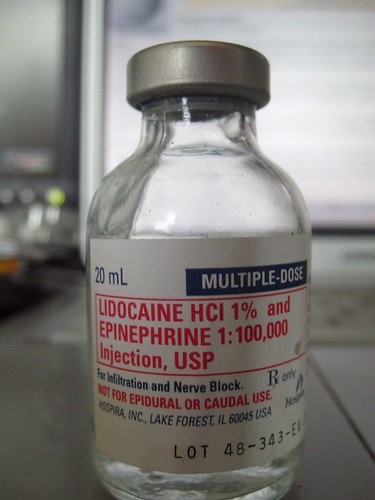 lidocaine is a kind of local anaesthetic. “Lidocaine/Epinephrine Injection” by Vaprotan is licensed under CC BY-NC-ND 2.0

It’s thought that the Inca people of Peru used the leaves of the coca plant (which cocaine is made from) as a kind of local anaesthetic between the thirteenth and sixteenth centuries. The first widely used local anaesthetic in Western medicine was cocaine, which was introduced in 1884. Unfortunately cocaine is addictive and can be dangerous, so chemists developed similar but safer alternatives.

When we feel pain it’s because the affected cells release ions (a kind of atom) that travel along the nerves, into the spinal cord and into the brain. Local anaesthetics prevent the ions being released, so the pain signal isn’t sent to the brain. Interestingly, scientists don’t yet know exactly how anaesthetics work but the most important thing is that they do!