This question was asked by John from Leeds, UK

Sinkholes are very deep holes that appear in the ground without warning, often swallowing cars, people and even houses. Sometimes they’re caused by abandoned mine shafts which collapse, making the ground above them sag and give way. More often though, they’re naturally occurring and of course this makes them even more unexpected.

Naturally-occurring sinkholes happen when a hole forms deep underground and gradually expands until the ground above it collapses in. These holes are caused by water trickling down through the surface soil until it reaches the soft rock underneath. Over hundreds or thousands of years the water gradually wears away the rock, creating gaps and holes far beneath the surface. The size of the hole increases until the ground above it is unable to sustain its own weight, and collapses into the hole. Rocks like chalk, gypsum, limestone and sandstone are particularly vulnerable to this process. Areas where this kind of erosion is common are called karst landscapes, and are often pitted with dips and depressions. Roughly 10% of the Earth’s surface is a karst landscape; the entire state of Florida in the USA is one, which is why sinkholes are so common there. 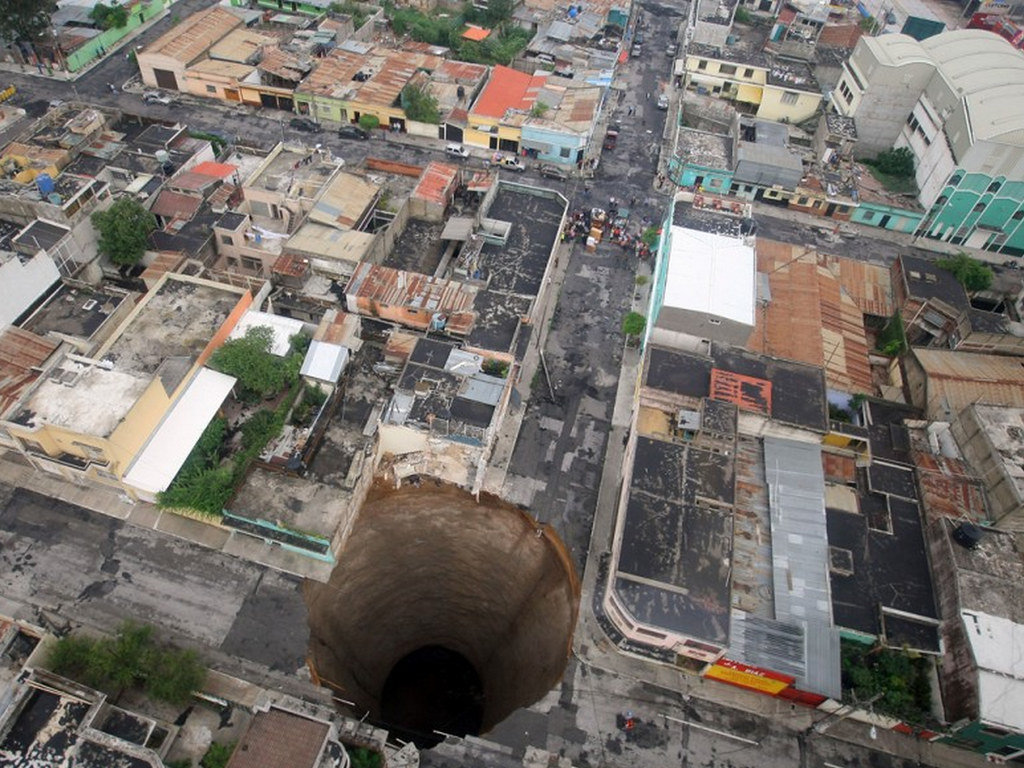 “Guatemala City in the spring of 2010” by KiwiDandy is licensed under CC PDM 1.0

The final collapse of land above a forming sinkhole is usually triggered by water – either too much or too little. A sudden increase of water in the soil, caused by a flood or heavy rain, can make it too heavy for the cavity below to bear any longer. Equally a drought or industrial water-pumping can remove water from the cave, weakening its ability to hold up the soil above. This is true of both naturally-occurring sinkholes and those caused by human activity such as mining.

There are some truly immense sinkholes in the world. The largest is the Xiaozhai tiankeng (the “heavenly pit”) in Chongqing, China; it’s 537 metres wide and 662 metres deep, and is full of rare plants and animals. The Zacatón sinkhole in Tamaulipas, Mexico, is the deepest known water-filled sinkhole (these are also called blue holes). It’s 339 metres deep and has small islands formed from calcium carbonate floating on its surface, blown about by the wind.