This question was asked by Cat from Dundee, UK.

If you look at a glass of water, it’s pretty obvious that it’s clear and colourless, and yet the sea is generally various shades of blue. In order to understand why this is, we first need to talk about light.

Sunlight is a spectrum of colours, from reds and oranges all the way through the rainbow to blues and purples. When the light hits an object, some of the colours will be absorbed and some will be scattered. An apple looks red because it absorbs all the other colours in the light and scatters only red.

“Swimming pools in the world” by Marieke van der Velden is licensed under CC BY-NC-ND 4.0

Similarly, the sea seems to be blue because it absorbs all the other colours and only the blue light is scattered or reflected. A glass of water is too small an amount for the reflection of the blue light to be obvious, but if you fill a white bath with water you will begin to see a blue tint. Swimming pools often have blue tiles to enhance this effect; if you had a swimming pool with red tiles it would look rather different!

Sometimes large bodies of water don’t look blue. An ocean with a lot of algae or plants growing and floating in it will appear green, while the Red Sea actually does look red because of the type of bacteria that thrive in its waters. The Yellow River in China looks yellow because of all the clay particles it contains.

The sky looks blue for the same reason – the water droplets in the atmosphere only scatter blue light, absorbing all the rest. 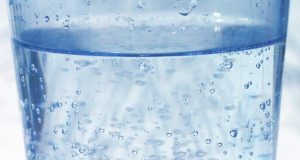