I bet you know someone with a tattoo. You may even have one yourself. Humans have been tattooing themselves and each other for many thousands of years, but rarely do we stop to consider how the process works. After all, your skin is constantly renewing itself and we lose almost a million skin cells per day. So why are tattoos permanent? 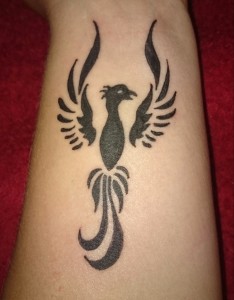 One of my tattoos – a phoenix.

Tattoos are made by piercing, puncturing or cutting the skin and applying inks or dyes to the resulting wound. In some cultures it is done with a needle or sharpened sticks, in others with a sharp blade or stone. Some Inuit tribes use a needle and thread, pulling the thread through the ink before ‘sewing’ the skin. Whatever the method, the result is invariably permanent, and this is because of where the ink ends up.

Our skin has 3 layers. The epidermis is the top layer and is constantly being renewed and replenished; this is where we shed skin cells from. Below that is the dermis, and below that lies the hypodermis. If the ink was only introduced to the epidermis it would quickly be shed, whereas if it went too deep and was inserted into the hypodermis it could cause scarring. To paraphrase Goldilocks, the dermis is just right! 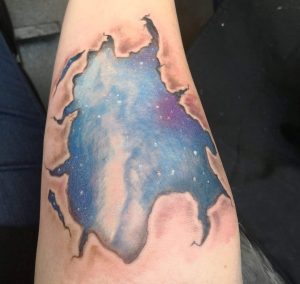 Another of my tattoos.

Each time a wound is created (modern tattoo machines puncture the skin up to 3,000 times a minute) the body’s immune system reacts in order to reduce inflammation and begin repair work. Specialist cells called macrophages virtually ‘eat’ the ink; some of them will be carried back to the lymph nodes but most will remain suspended in the dermis. Because they have no way of dissolving or disposing of the pigment, there it remains. There is likely to be some fading; this is partly due to the shedding of some epidermis cells which absorbed ink as the needle passed through them, and partly due to exposure to the sun’s radiation.