In some areas of scientific study, producing data isn’t a problem; it’s analysing it all that can be difficult. Astronomy is one such area, where telescopes are able to see so far that they can record images of millions of galaxies. It would take many years for scientists to view all these images, let alone classify them. And this is where Galaxy Zoo comes in.

Galaxy Zoo was founded in 2007 and is one of the citizen science projects on the Zooniverse platform. This means that members of the public are able to collaborate with professional scientists to analyse scientific data. The site features images of galaxies, and guides members of the public through the simple steps of classifying them; people are better than computer programs at the kind of pattern recognition needed.  The original Galaxy Zoo featured images of a million galaxies recorded by the Sloan Digital Sky Survey, and the team behind it assumed that it would take years for all the galaxies to be classified. In fact within just 24 hours they were receiving almost 70,000 classifications an hour and more than 50 million classifications were made in the first year alone.

One of the key features of Galaxy Zoo is that each galaxy will be classified by many people, allowing the researchers to simply take an average of opinions. So the responsibility for correctly interpreting an image doesn’t fall on just one person but on many, meaning that any errors are weeded out. Another amazing thing about Galaxy Zoo is that the images have been recorded by a robotic telescope and processed automatically, so you might be the first human to ever see that galaxy. Some of the images currently waiting to be classified are from the DECaLS (Dark Energy Camera Legacy Survey) project, which is part of the effort to measure and understand dark energy.

If helping astronomers classify galaxies doesn’t interest you, why not have a look at some of the other Zooniverse projects? Their subjects vary from biology to climate, medicine to nature, history to literature and much more – and you could be part of an important discovery. 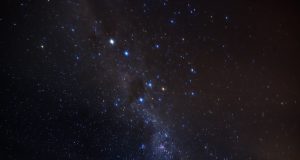 Why does the night sky look black when there are so many stars?