This question was asked by Pauline from Edinburgh, UK.

Goosebumps, also known as goose pimples or goose flesh, are called that because they look similar to the skin on poultry after the feathers have been plucked. We usually get them when we’re cold, scared or feeling strong emotions like pleasure or surprise.

The second factor is caused by the adrenaline; muscles throughout the body contract, or tighten, in readiness for sudden movement. When the muscles beneath the skin contract they cause tiny depressions to appear, which makes the surrounding area look as though it’s raised up. This also causes the hairs on the skin to stand up, which is a leftover response from when we were less evolved and our bodies were covered in hair. In animals with thick coats of hair or fur, this reaction increases the amount of insulation between the cold air and the skin so the animal feels warmer. It also makes the animal look larger, which is useful if it’s feeling threatened. 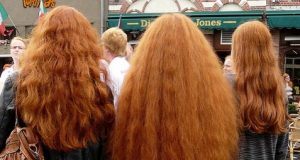 Why do humans have hair?