This question was asked by Nikolas from Alexandroupoli, Greece.

The surface of our planet isn’t solid; enormous plates of land float on top of molten rock, like biscuits floating on honey. Volcanoes are usually mountains and have an opening beneath them into the Earth’s crust (for more about the Earth’s crust and tectonic plates have a look at this article about tectonic plates and earthquakes). When the molten rock, called magma, comes under great pressure it forces its way up through cracks in the rock and erupts from the top of the mountain. In a way volcanoes are the Earth’s safety valve, releasing pressure from below the surface when it gets too much. Once the magma is outside the volcano it’s called lava. As you can imagine, it takes very high temperatures to melt rock, so lava is typically between 700° to 1200° Celsius and can burn pretty much anything in its path.

Scientists who study volcanoes are called vulcanologists (the word ‘volcano’ comes from Vulcan, the Roman god of fire). They classify volcanoes into 3 categories: active, dormant and extinct. Active volcanoes are ones that are either erupting or have erupted recently – and to vulcanologists that means within the last 10,000 years! A dormant volcano is one that hasn’t erupted in the last 10,000 years but is expected to erupt again at some point. This is usually because the magma is still present beneath the volcano, but isn’t currently under sufficient pressure to cause an eruption. When the pressure begins to increase, the magma begins to move upwards and eventually erupts from the volcano.

An extinct volcano is one that isn’t expected to erupt ever again, usually because the movement of the tectonic plate it sits on has cut it off from the opening in the Earth’s crust where the magma flows through. Eventually the pressure from the magma will become enough to create a new volcano.  The trouble is, these classifications are human ones and the volcanoes don’t know that they’re meant to be extinct! Mount Vesuvius was technically an extinct volcano when it erupted in 79CE, burying Pompeii and Herculaneum. There are also some volcanoes should be extinct but might not be, like the one in Yellowstone National Park in the USA. It hasn’t had a major eruption in more than half a million years but there seem to have been lava flows as recently as 10,000 years ago. 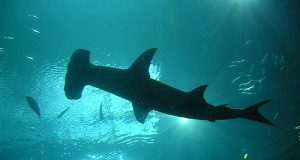 There are sharks living inside an active volcano