This question was asked by Immy from Mersey Vale school, Stockport, UK.

Millions of years ago our ancestors were covered in almost as much hair as chimpanzees are today. They lived in forests and foraged for nuts, fruits and roots to eat, while their hairy coats kept them warm in the shady woodlands. But about 3 million years ago the climate changed and the woodlands became open grasslands; a hairy coat was a problem when you were out in the sun all day, and our ancestors’ bodies had to adapt. Over generations most of their hair dwindled and they began to sweat as a way of cooling down.

Interestingly, we still have almost as much hair as a chimpanzee, but now it’s much finer and shorter. Look at your forearm, for example – you’ll see very fine hairs growing there. These tiny hairs still serve a purpose though, as they stand up when you get cold, attempting to trap air and causing goosebumps.

But why do we still have hair on our heads? There are several theories, but one of the most popular is that it stems from when our ancestors became bipedal (pronounced by-PEE-dal) and began walking on two legs instead of all fours. This meant that the head was the main focus of the sun’s rays, and so hair continued to grow thickly there in order to protect the scalp and brain. The hair keeps a cushion of air between the hair’s outer surface and the scalp; curly hair is best at this. Another theory is that humans have hair for the same reason that some birds have brightly coloured feathers – it’s to make them more attractive.

You’ll have noticed that there’s also hair on your face, mainly around your eyes; our eyebrows and eyelashes do important work. The eyebrows stop sweat, rain and other moisture running into our eyes, which would make it harder to see. Eyelashes protect the eye from dust and other debris, and also cause the eye to automatically close if something touches them unexpectedly. This is a useful reflex  that can prevent things from damaging the eyeball.

Adults also have thick hair on other parts of their body, most notably the armpits and groin. These are thought to serve several purposes, the first of which is to prevent the skin rubbing too much in these sweaty areas, which could be rather sore. Another reason is that the smell of the sweat becomes trapped in these hairs, allowing the person’s scent to become concentrated and more easily identifiable. This would have been important for our ancestors, and may play a part in attracting a mate. The thicker hair on a woman’s groin also traps dirt, preventing infections from entering her body there. 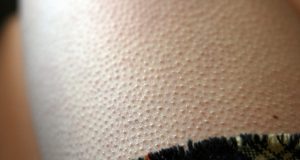 Why do we get goosebumps? 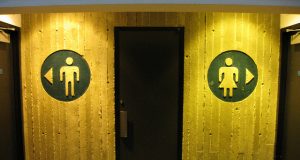 What’s the difference between male and female?